Why We Run: For my friend and mentor, Dave 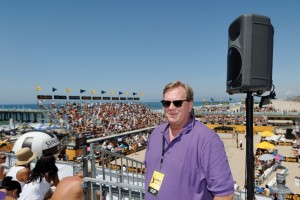 From 2010-2013, I worked for USA Volleyball and even had the opportunity to coach USA beach volleyball in the 2012 Olympics.

While at USAV, I developed a special relationship with my boss and mentor, Dave Williams.

I knew I had lost a great friend at the time, but the extent of the loss took years for me to realize.

I would really like to run in his honor with Jack’s Team.  Here are a few articles written about Dave:

“Dave Williams loved to tell stories. If the joke was on him, so much the better. A favorite tale was from his time as a walk-on defensive back at Ohio State. For the uninitiated, walk-on means no scholarship, which means no free pass on tuition, fees, books, room and meals. But lots of bruises.

Having set the scene, he’d explain how they were going three-quarters speed in practice one day when Tim Fox had a mischievous suggestion.

“Smack Archie when he comes through the hole,” Fox said.

“Archie?” was all Williams could say in response.

Walk-ons do not say no to an All-American DB, even if the target is the tailback who went on to win the hallowed Heisman Trophy two times.

“He darted around me and I flew through the air; 129 guys applauded,” Williams said, shaking his head at the memory.

The Brilliant, Ohio native was on the football and basketball teams at Ohio State during one of the golden eras of Buckeyes sports.

“Williams, a native of Brilliant, Ohio, joined USA Volleyball in April 2010. He is the only person to have held the position of managing director of beach programs, which was created as part of a USA Volleyball initiative to develop short and long-term growth for beach volleyball.

Prior to coming to USAV, Williams was well-known for his behind-the-scenes management roles with the Association of Volleyball Professionals (AVP). Williams held several AVP senior-management positions, including director of tour operations, director of marketing development, and most recently vice president of operations. Williams produced more than 150 AVP events. Prior to joining the AVP, Williams was the managing director of the Women’s Professional Volleyball Association from 1997-1998.”  Click here to read more …