When caught early, melanoma is highly curable.  If you have or suspect you have a skin problem, please consult with a dermatologist, or other qualified professional healthcare provider.

A form of cancer that begins in melanocytes (cells that make the pigment melanin). It may begin in a mole (skin melanoma), but can also begin in other pigmented tissues, such as in the eye or in the intestines. 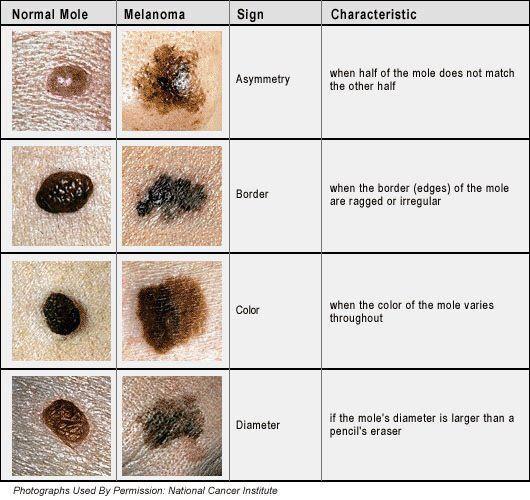 According to the American Cancer Society:

What Does Melanoma Look Like
Free Booklet: What You Need to Know About Melanoma and Other Skin Cancer.

Melanoma is a very serious form of skin cancer. Although accounting for only 4% of total skin cancer cases, it is the leading cause of skin cancer related deaths. The risk of developing melanoma is increasing, and most frighteningly, the cases of melanoma amongst young children are on the rise. The main cause of melanoma is believed to be spending too much time in the sun, which results in exposure to ultraviolet (UV) radiation. People with fair skin and lighter hair (those that tend to sunburn easily) are at greatest risk, but anyone who is exposed to large amounts of sunlight is at risk.

Am I At Risk

You may be at a higher risk for developing melanoma if you have at least 5 of the criteria below. Talk to family members and your doctor about whether you are at an increased risk and the steps you can take to prevent melanoma.

Why Is Tanning So Dangerous

Melanoma is epidemic. Melanoma is one of the fastest growing cancers in the U.S. and worldwide.

Melanoma Without a Primary (Internal)

About 5% to 10% of melanomas are found first in internal areas of the body, such as lymph nodes or internal organs, without any obvious signs on the skin.

Some doctors believe that most of these melanomas originate on the skin and arise from:

Ocular melanomas occur in five distinct sites around and in the eye. Each type has its own distinctive growth pattern and prognosis:

What Is NOT Melanoma