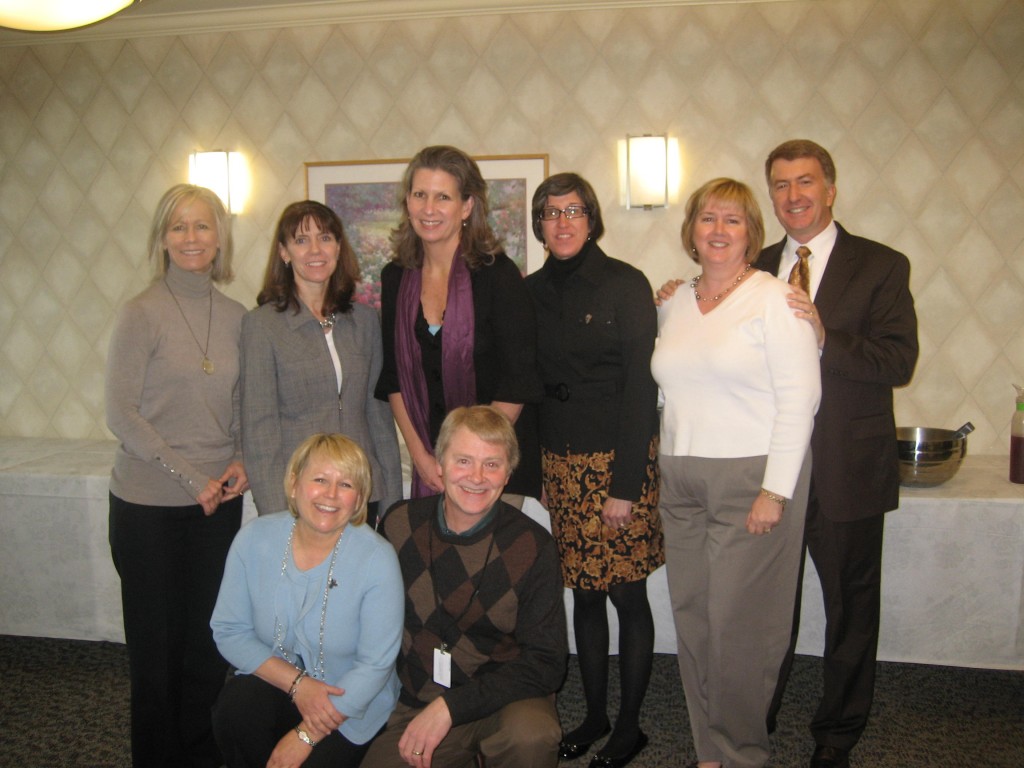 “Word of who Jack Marston was and what he meant to so many people was well known at Lutheran General. The suggestion that the Jack H. Marston Foundation consider a five-year gift commitment of $250,000 to establish the Healing Garden in his memory and provide much needed research support for Dr. Richards was not only very appropriate, but something we knew Jack would have approved.”  Entire speech below:

Speech given at Advocate Leadership Conference on June 12 and 13. Written and presented by Mark J. Valentino, JHMII Melanoma Fund Board Member.

“Jack H. Marston II was truly one of those people who come along once in a lifetime. If you were blessed to have known him, you were forever changed by the encounter.

He also was the sort of individual who inspired others to be like him.

If you were married, you wanted to love your spouse as devoutly as Jack loved his wife, Sharon.

If you were a parent, you wanted to provide the love, support, and guidance that Jack gave on a daily basis to his children: Jennifer, Jack, Matthew, and Michael.

In the business world, you wanted Jack’s drive to succeed and a work ethic based on integrity and that “nose to the grindstone” attitude.

So, when Jack died at the age of 47 on July 12, 2004, it was no surprise to me and countless others that something extraordinary was going to happen to keep his memory alive.

You see, Jack Marston was larger than life.

One of the many ways Jack gave back to his family and to his community was through his passion for sports.  As I gathered information for his eulogy, I learned that Jack coached more than 2,000 children in Glen Ellyn and the surrounding communities in sports such as baseball, soccer, basketball and swimming.

Wherever a game was to be played—Jack was there: Mentoring and offering encouragement to youngsters who may have never hit a baseball before or kicked a soccer ball towards a net.

At his wake service, hundreds of young boys and girls came with their families to pay their respect. They wore the bright colored jerseys of the teams Jack had coached.  It was one of the most beautiful rainbows you ever could see.

Because Jack Marston loved his family and friends so much, he fought bravely and tirelessly against the melanoma that was ravaging his body. His quest for better health soon brought him to Advocate Lutheran General Hospital and the supportive care of Dr. Jon Richards and his dedicated team of nurses and support staff.

Yet, for Jack and for those he loved, his battle ended on a July day nine months after he was first diagnosed with cancer.  Instead of managing one of his children’s baseball teams that late afternoon, Jack was winding his way towards Heaven’s gates.  He would be fine—our faith would soon assure us—but it was the rest of us who would somehow have to find a way to carry on with this unfathomable void in our lives.

Sharon and her family have carried on. And so have Jack’s friends.  We have done so by wrapping our arms around one another and finding ways to “do what Jack would have done.”

One of the ways we have carried on and have done Jack’s good work is through the establishment of the Jack H. Marston II Melanoma Fund and through strong ties right back here—to the caring and compassionate staff at Advocate and incredible people like Dr. Richards.

What started as a small collection of gifts in lieu of flowers at Jack’s wake to support  Dr. Richards has grown into an incredible story of vision, commitment, and a desire to make a difference—just like Jack did throughout his life.

Not long after Jack died, neighbors gathered with Sharon and came up with the idea of hosting a race in Jack’s memory.  He was an avid runner and successfully completed four Chicago Marathons so that each of his children could have a medal from the race.

We gathered by the hundreds at Ackerman Park in Glen Ellyn on a crisp Sunday morning—the same day as the Chicago Marathon—and we ran and we walked for 3 miles.  We ran and we walked with tears in our eyes and with Jack’s loving memory burning deep within our hearts.

We ran and we walked for Jack.

And at the end of the race, we invited Dr. Richards to the podium to say a few words about Jack and his courage. And then we presented Dr. Richards with a check for $50,000 to support his research and to help find a cure for melanoma.

After the success of the first fundraising effort, the Jack Marston Melanoma Fund dream team gathered at Sharon’s house, astonished at what they had accomplished.

They were proud of their efforts but prouder still how so many people gathered in Jack’s name to help find a cure for melanoma and to spread the word on preventing this disease from taking another life.

Just as proud of this effort, and offering encouragement and vision, was the Lutheran General Development staff that came to Sharon and the Fund with a vision.  They shared with us the idea of a healing garden that would honor Jack’s memory and provide comfort and consolation for other cancer patients undergoing chemotherapy.

Word of who Jack Marston was and what he meant to so many people was well known at Lutheran General. The suggestion that the Jack H. Marston Foundation consider a five-year gift commitment of $250,000 to establish the Healing Garden in his memory and provide much needed research support for Dr. Richards was not only very appropriate, but something we knew Jack would have approved.

We are proud of our relationship with Advocate Lutheran General and the bond that has developed between the hospital staff, Sharon and her family, and the Jack’s Fund board members.

We are proud to support the work of Dr. Richards.  His ability to care for the patient as a whole person and in turn, communicate with comfort, and establish trust and friendship with the patient and family, is truly a ministry.

The annual October “This Run for Jack” 5K Run/Walk is now a fabric of our lives and for those who loved Jack and those who have come to know him through the efforts of the Fund.

We have increased corporate support and have added sponsorship teams to run in the Chicago Marathon and, in 2008, runners will help raise money for melanoma research and awareness at both the New York City and Boston Marathons.

In June of 2006, we held the inaugural awareness seminar with Dr. Richards as the keynote speaker.

Our Foundation website is chock-full of information on melanoma prevention and how to protect oneself and loved ones from the harmful rays of the sun.

Our Foundation now has a four-pronged mission:

To date, $250,000 has been given to Dr. Richards for melanoma research and treatment.

None of this would have been made possible without the support of Dr. Richards and the wonderful community at Advocate Lutheran General Hospital.

We thank you for that support.

We are proud to share with you what a wonderful person Jack Marston was and what an incredible inspiration he continues to be to so many who truly want to make a difference in this world.”